Sometimes, there’s so much going on in the world that I don’t have time to write about all of it (well, I do but I enjoy sleep and Netflix too much.) So I’m trying something new to keep you up to date on all the crazy, sexy, and cool news you should be thinking about.

University President Blames Female Rape Victims
Ugh, I can’t even… Lincoln University president Robert R. Jennings claimed that some female students on his campus have lied to authorities about being raped when they’re with a man and “it didn’t turn out the way they wanted.”

President Jennings spoke at a women’s convocation at the university (whyyy?) and felt it necessary to give the young women present some advice about men and how they should behave around the opposite sex. “Men treat women the way you allow us to treat them,” he said. “We will use you up if you allow us to use you up.”

Well gee, thanks for the insight into the impulsive nature of the man, who has no control and therefore no responsibility for his behavior and the way he treats a woman. Being respected and safe and in a happy relationship is all the woman’s responsibility, right? There’s just nothing right about this. Yea, I’m going to have to come back to this one.

TIME Magazine: Ban “Feminist”
TIME Mag listed “Feminist” as one of the cringe-worthy words voters can choose to “ban in 2015.” Their reasoning for including it on the list? Feminist “became a thing that every celebrity had to state their position on whether this word applies to them, like some politician declaring a party.” Because being a feminist is only something a few people should be and feminism doesn’t need that kind of notoriety from celebrities (sarcasm alert).
I get what they’re saying. Feminism has lost its meaning behind the movement by becoming the hippest thing since fake glasses. My suggestion: How about instead of banning the word, we clarify it’s definition and help grow the movement? 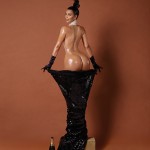 No one ass should have all that power. Kim K. posed nude on the cover and in the pages of Paper Magazine’s Winter Issue causing all grandma’s across the globe to clutch their pearls, all hardcore, sexually liberated bad asses to clutch their fists and hoist them in the air in solidarity, and all horny teen boys to clutch their…nevermind. The shots of Mrs. West’s shiny booty, breasts, and nether regions soon went viral (as they have in the past) and led many people to question whether public nudity is proper behavior for a wife, mother, and role model for young girls.
Not to mention the outrage at the hypersexualization and objectification of Kim’s body. Her behind is literally used as an object on which to set a glass of champagne (which shoots from her hands into the glass on her ass. The woman is literally a drinking fountain).
On top of all of that, there are some who say there are racist undertones of Kim’s images. First, her cover shot is a copy of a similar shoot from the 70’s featuring a Black model. Second, the fascination with her body is eerily reminiscent of the fascination with the body of Saartjie Baartman, which was oogled and made a mockery of in 19th century Europe.

Nice Guys finish last
There’s some justice in the world. Remember that woman in Detroit who was shot after she refused to give a man her number (yea, that really happened)? Well, it looks like her murderer is finally being charged. According to witnesses, Mary Spears was leaving an event in the city when a man she didn’t know approached her and tried to talk to her. He asked for her number and her fiancé who was there told him that she was taken and security escorted him away from her. He wasn’t having that, pulled out a gun, started shooting everywhere and killed Mary Spears. Talk about entitlement. But you know, I’m sure he’s a “nice guy.”
Anyway, now her shooter, Mark Dorch, 38, is being charged with first degree murder after taking the life of the engaged mother of three. His trial is set to begin in February.

Erykah Badu sings with her daughters
Isn’t this the cutest thing ever?! Sultry songstress Erykah Badu recorded a video of her daughters singing “Try” by Colbie Caillat, a beautiful song about being yourself.

That’s all for now. Remember to stay woke, friends! And live life unapologetically.