One thing I love about being a writer is all of the cool people I get to meet. One such person is a young rapper from Baltimore named Edem Kwame but his fans may know him better as D-Cal. The dude is seriously dope. He opened up a show for Wale and Big Sean just a few months ago and is releasing an album this summer (WHAT?!) I had the opportunity to interview him for Hypefresh Magazine about his fast growing success and his future goals. Check out the original article here.

From local aspiring artist, to opening act for two of the biggest names in hip hop (I’m talking big like Big Sean and Wale BIG!). Edem Kwame, known by his stage D-Cal, is quickly rising to super stardom. The Baltimore native by way of Ghana is making his mark on the Hip Hop music scene and putting the DMV (DC, Maryland, Virginia) on the map. D-Cal is new and next on the scene.

I sat down with my good friend and dopest rapper I know to hear more about his latest endeavors. I wanted to share this exclusive with HYPEFRESH®. Get hip, everyone! And get ready for D-Cal’s hip hop takeover.

So tell the people who you are. Who is D-Cal? Where did you come from?

I was born in Ghana and that probably plays the biggest role in my sound. I grew up listening to music in other languages. Started rapping on a green box in Baltimore when I was about 10 and kept it from there.I actually don’t know why I never let it go.

What makes you stand out from the other local rap stars?

Started rapping on a green box in Baltimore when I was about 10 and kept it from there.I actually don’t know why I never let it go…I don’t think people should listen to me as opposed to, but in addition to. There’s no need to X anyone out of the equation… just understand that I do me better than anyone else.

Don’t really have a go-to sound to my knowledge. My delivery is more aggressive than most new age rappers because I developed my early skills in the battling circuit. I’m rapping to people that aren’t necessarily in the best position in life, but are looking to do well. My content is very aggressive in tone, but if you actually listen to what I’m saying, you’ll realize the message is more reflective than anything.

My music is all about the “come up” and working hard to get what you want regardless of outside influences. Nothing is more exciting than the come up- you work so hard never knowing when your moment will come. That’s all I know how to do as a person so that is what I convey in my music.

So what are you up to these days?

I just finished opening for Wale and Big Sean at Byrd Stadium. I have been doing somewhat of a College tour, hitting as many schools in the area as my schedule permits. Currently prepping for the release of “Hunger Pains” which should be out by late spring.

Wait, you just skated across that like opening up for Wale and Big Sean is no big deal at all. How did this happen?!

To open up (at Art Attack), I had to compete in a competition called “Battle of the Bands”. Nobody thought I was going to win because I was the only solo performer in a “band” competition. It was actually difficult as hell but the people voted me through.

Were you nervous as hell?

I ALWAYS get nervous right before I go on stage whether I’m performing for 10 people or 10,000. Once I actually get on the stage, my nerves dissipate as soon as I open my mouth. There’s no way to describe the feeling of knowing everyone in a room is looking to you for entertainment. Then call and response actually gives me confidence. It means they’re attentive and engaged.

You sound like a legit superstar. A lot of artists describe getting in “the zone” the same way. How do you stay grounded?

I’ve listened to the first single released from the album. And the track GOES! What’s “Water Whippin” all about?

Water Whippin- It’s a concept that I’ve been using for a while that aligns with the idea of the #DoubleUp movement. Essentially,with whatever you’re doing in life, if you’re actively working to achieve something, you’re “Water Whippin”. The actual verses are telling two different sides of the same story. The first verse is explaining the difference between my life and the lives of many of the people that look down at how I & my community operate. The second verse discusses what happens when we get fed up.

While the world waits for “Hunger Pains”, how are you staying relevant in this ever changing music industry?

My newest venture has been the release of these #DoubleUp shirts. These motherfuckers are live. We’re selling them to invest money in my next project, “Hunger pains” and of course since they have my movement’s hashtag written on them, it’s simultaneous promotion. Aside from that, I’ve been doing shows everywhere I can. Just getting the name out and networking wherever I go.

And how can potential fans jump on the D-Cal, #DoubleUp train?

Best place for now is youtube until we get this website up and running. Right now, you can just type “D-Cal” into youtube and everything I dropped within the past 5 or so months comes up. It’s kinda cool. To keep in touch with me, I’d suggest staying up with me on Twitter and Instagram @DeuceCaliber. 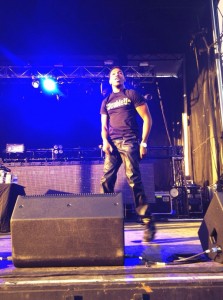