Can I be frank with you guys?

I get so sick of hearing the phrases “nice guy” and “gentleman”. I could do without hearing “friend zone”, too. And I’m done feeling sorry for you if you think you fit in one of these categories. 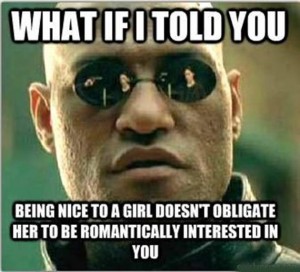 The shootings at Isla Vista have sparked a conversation about sexism and it’s dangerous consequences for women in this day and age. But apparently, misogyny has dealt men an unfair hand as well wherein they feel #YesAllWomen and other conversations about sexism have failed to acknowledge the nice guys of the world.

So I’m going to acknowledge you now. Brace yourselves.

Time Magazine published a piece about Elliot Rodger, the mass shooter. In it, the author makes a case about how Rodger’s chronic virginity and being turned down by his female classmates may have left him with no choice but to kill six people. She writes:

“Nice guys like him”? What does being a “nice guy” even mean? Last time I checked, it wasn’t nice to throw a deadly temper tantrum just because you’re a little sexually frustrated (I mean, who isn’t at 22?).

I understand. There are pressures society puts on men to define their masculinity by how many girls they’re smashing and how many hearts they break. But since when did not being able to fit in with modern society provide an excuse for assholery? Does male privilege run so deep that the idea of not being able to have something someone else has (in this case, vaginas) is now just cause to go on a murderous rampage?

I literally cannot count how many men have complained to me about not getting girls because they’re “too nice”. Since when did being nice equate to being interesting? Being nice is just a personality trait that many humans on this earth possess, believe it or not. Come correct and come with more than just “I do nice things” to woo me. I do nice stuff too. What else ya got?

T.J. Holmes also added some interesting points to the Nice Guy discourse. In his piece for The Root, When a “Gentleman” Is Linked to Mass Murder, he writes:

“There’s sometimes no distinction made between the sexism inherent in some common behavior and the sexism and hatred that led to mass murder in Isla Vista, Calif…. #YesAllWomen has done a disservice. It makes no distinction. While it has allowed women to share their experiences and legitimate fears and concerns about how society views women, it gives the sense that all sexism is created equal.”

I actually laughed out loud at this one.

So, you want a “distinction”? You guys want a cookie and a blue ribbon for being a Nice Guy Island in a sea of sexist ass holes? How about instead of soliciting pity from me and demanding that you be exempt from the #YesAllWomen conversation, you actually do something nice and speak on behalf of women who have been put into dangerous situations due to sexism and misogyny? How about you help redefine masculinity for the sexless boys out there who are on the brink of mass murder? How about you have several seats?

Let’s talk about the fact that Holmes felt it necessary to distinguish himself and the men who may agree with him as “gentlemen” who’ve been unjustly compared to other men (how dare we compare you with the common riff-raff?!). But it’s those same gentlemen who seemed shocked that women don’t give them a distinction and a reward for their niceties. This shock and disdain sounds an awful lot like the reasoning behind Rodger’s mass shooting. Just saying… I’m sure he thought he was a gentleman, too, who deserved to be singled out from the everyday guys and be seen for the good man he thought he was.

Too often, the words “gentleman” and “good man” are used as synonyms when in reality, they are not the same thing. What is a gentleman anyway? In it’s basic sense, it’s a man who is chivalrous. One who is polite and pays for meals on a date, I guess. He avoids using sexual or foul language in front of people, he opens doors, pulls out chairs, bathes regularly, blah blah blah. A gentleman practices basic human manners that should be in use at ALL times for ALL people, not just women they’re interested in dating.

Men tend to have these generic attitudes about women and how to treat them. I hear several men say “I know I’m a good man, I open doors for women, I pay for her stuff, I know I’m a gentleman” All men should be gentlemen, but not all gentlemen make a “Good Man”. I’ll repeat for the cheap seats in the back: being nice does not make you a good man or a good person. While chivalry is great and a commendable attribute in any man, it isn’t the blueprint to being a good mate or to treating a person right.

What I’m saying is, your Gentleman Card is not a VISA- it’s not accepted everywhere. And neither is your Jackass Card, for that matter. The world isn’t separated into nice people and jerks. The way to a woman’s heart–if that’s what you’re after–is to find out what goes on in her heart. What are her interests? What makes her laugh? What pisses her off? What turns her on? Treat her like an individual. Be interesting, damnit.

And just like women are individuals, I know men are individuals as well. I know all of you guys aren’t going out on killing sprees because you can’t get laid. I know all of you aren’t yelling at me to “smile, baby!” in parking lots or at Metro stations. I know some of you won’t call me a bitch for not taking your phone number. But you don’t get special treatment for being nice. There are plenty of nice women and girls who are still getting harassed and raped and shot by a lot of “nice” men.

I know some of this may have seemed a little harsh but, as I mentioned in my title, I’m done feeling sorry for men just because they think they’re “nice”. And it’d actually be very nice if men would stop expecting sex, special treatment,  and other rewards just because they say and do nice things. The world doesn’t work like that. Geeze, what are Disney movies teaching you men?