A short while back, Rihanna premiered her music video for her hit single “Pour It Up“. The song itself is superficial, glorifying the extravagant lifestyle of the obscenely rich, famous, and wasteful. But the video pushes new limits. It depicts Rihanna throwing money in the air, smoking cigars, and grinding and twerking on a golden throne. While she’s busy doing that, viewers will also see nearly naked strippers sliding effortlessly up and down poles and splashing around in ankle-deep waters.

The explicit video spawned quite a conversation on social media. A lot of RiRi fans absolutely loved it. Then again, a lot of people didn’t love it at all. Most notably on my memory, the Around The Way Curls blog took to Instagram condemning the video saying that Rihanna went “too damn far” and that “there is a big difference between freedom and enslavement”. 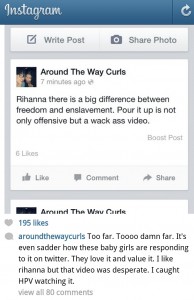 This particular comment got me thinking: Are women becoming more sexually free or are we slaves to the expectations of an over sexualized media?

I’m on the side of sexual freedom.

In most media, women are depicted as sexual objects and are usually submissive to men. Black women and Latinas are the most objectified when it comes to sex in the media. We’re the vixens and the video hoes, existing solely for the pleasure of the men we dance on and around.

But here, we see Rihanna, self-proclaimed “bad girl”, being completely sexy without a single man present (unless you count the production team and crew). She’s sexy for the sake of being sexy,  taking complete control of her sensuality and giving other women permission to do the same. Shouldn’t women–particularly women of color–be a little more proud and excited about the video? 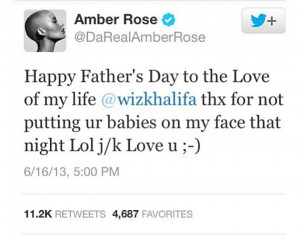 Sex is a universally taboo topic of discussion but women tend to get more criticism than men when we talk about it. On Twitter earlier this year, Amber Rose posted a Tweet about her husband, rapper Wiz Khalifa, ejaculating on her face. She received quite a bit of backlash and was called a whore. A whore, for talking about sex with her husband and father of her child. But songs with lyrics like “I wish I could fuck every girl in the world” lead to soaring album sales. Taylor Swift writes songs about her ex-boyfriends and she gets boycotted by a baptist church. Miguel releases a single describing his efforts to get a woman drunk so she’d sleep with him and it becomes an instant hit. Why is it okay for men to talk about sex with us women, but we can’t be expressive about our own sex lives?

The urban adage “lady in the streets, freak in the sheets” comes to mind. This basically means that if you’re a woman, you have a perceived responsibility to keep your sex life private if you’re to be seen as respectable. Women are usually the subjects of sexual conversation and sexual media. But when women themselves talk about sex or are seen enjoying and wanting sex, suddenly, they are whores. Suddenly we don’t respect ourselves or any other women. In essence, we’re meant to be seen, not heard.

But Rihanna’s “Pour It Up” video cries out loud: “I’m sexy andI know it!” I feel a new wave of freedoms coming along for women: the freedom to express ourselves sexually. But when we do so, we put ourselves at the mercy of men and women who will say that we are going too far. When is too far really too far?

One major criticism of Rihanna is that she’s a bad role model. It’s a widely held belief that she is a negative influence on impressional young black girls who listen to her hit records like “S&M” and see pictures of her scantily clad and smoking weed. Her sexual and scandalous behavior may be encouraging others to adopt her lifestyle. In fact, earlier this year, The Daily Mail attacked Rihanna for her “slutty” behavior. Some have even speculated that the pressures of the music industry caused Rihanna to drop her innocent pop image and instead become the sexy rebellious vixen we see today. 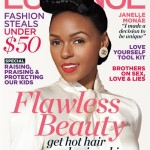 Does the media really have that much control over our lives that we’re slaves to it? Does it make us think about sex and being sexy too much? Perhaps we give the media too much credit for dictating what we care about and how we should behave. It could be that the media is beginning to reflect the sexual freedoms of the modern woman. And that freedom includes being overtly sexy and not being sexy at all. I’m reminded of Janelle Monae, an equally strong presence in the music industry as Rihanna is, who said in the May issue of Essence Magazine, she wants to “redefine what it means to be sexy…(and) to show people and young girls there’s another way”

Media is helping us be more expressive and think about sex in an entirely new way. The media didn’t invent sex, after all. At the end of the day, we’re not slaves, we’re very free. We’re free to be ourselves whether that’s sexually expressive or modest and conservative unapologetically and without judgement. We are free to choose.

55 thoughts on “Are we sexually free or slaves to a sexy media?”