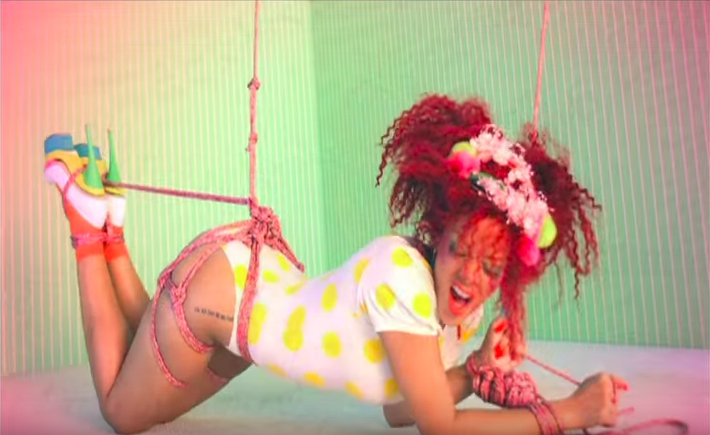 There are moments when I look back at my past self and I’m immediately filled with face-reddening, knee-buckling, I wish I could time travel just so I can go back and slap myself embarrassment.

There was also a sad time in my life where I didn’t like Rihanna or her music. Forgive me. And brace yourself for a cringe-worthy story. *sighhhhh*

Now, I bopped and jammed to “Pon de Replay” and “Umbrella” in my formative years. Then everything changed in 2009 when the star from the islands dropped “Rude Boy” and subsequent music video. As if listening to lyrics about her “riding” rude boys if they could “get it up” (we all know what “it” was) wasn’t vulgar enough, the video showed her bending over backwards and grinding on animals and touching her breasts.

I always thought Rihanna was talented and pretty and didn’t need to be hypersexual to be successful. I was appalled. But things only got worse. A year later she released another single “S&M” and I just… no words could describe how I felt to watch the woman I once admired swallow bananas and get tied up with ropes while singing about how she likes whips and chains and the smell of sex.

I was not here for Rihanna, this good girl gone bad, and I would tell anyone who would listen. Didn’t she know that little girls would be watching her sordid videos and singing her songs and they’d be encouraged, even pressured, to pursue deviant sexual behavior in their own young lives?! I mean, if she behaved this was, if she had no standards or decorum or self-respect, it’s no wonder she ended up with a man like Chris Brown who would beat and degrade her.

I KNOW! I know. I suck. I’m terrible. God, I look back on this time in my life and I hate myself for thinking this way! I really felt this way once about another woman, another human being. I’m so embarrassed and ashamed. These days, I’m the biggest RiRi fan ever and, more importantly, I know better.

I believed once that there were good girls and bad girls and being a good girl would save me. If I was polite, smart, quiet, went to church, went to school, dressed “classy,” followed directions and only attracted positive attention, everything in my life would work out fine and people would treat me with respect. So I was a good girl and I still ended up in an abusive, manipulative relationship. I’m still disrespected by men and authority figures I don’t know and those I do.

How many “good girls” and “bad girls” alike have been preyed upon by abusers, co-workers, law enforcement, politicians, anyone with authority? How many were once told that if they just respected themselves, behaved better, nothing like this would happen to them? How many of them feel like it’s their own fault they were treated that way?

It gives the Harvey Weinsteins and the Roy Moores and the Daniel Hortclaws and all the other trash people in the world power to treat others who they perceive to be beneath them any way they want. Worse than that, it takes power away from victims of their twisted worldview, and makes them believe they deserve whatever treatment they got, because they must have said, or done, or dressed in something wrong. It silences us.

And worse still, these politics of respectability are something too many of us still believe in.

Look at Olympian Gabby Douglas who tweeted on Saturday “It is our responsibility as women to dress modestly and be classy. Dressing in a provocative/sexual way entices the wrong crowd.” in response to her teammate, Aly Raisman, who was trying to make the opposite point, that it’s time we stop shaming women for how they dress and behave. 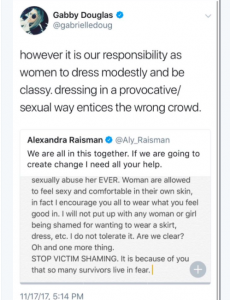 What Gabby said sounds soooo similar to how I used to feel about Rihanna and Nicki Minaj, how some folks feel now about Cardi B. and Beyonce and even some of the victims who’ve come forward with sexual assault allegations against Hollywood execs.

I get it though, Gabby. And instead of adding to the dragging of women’s names through the mud, I’m going to offer you some grace and say I get it, because I used to feel the same way. You’ve probably been told, just as I have, that they way you look will determine how people treat you. You’ve probably been told to keep your skirt finger tip length and to drape a scarf over your knees when you sit in the pews at church. You’ve probably heard someone like me ranting about how disgusting Rihanna (or some other woman) was and how we need to do better.

But all we’re really learning from these lessons is how to treat each other with shame and stigma. We’re learning to believe that people like Cardi B. and Rihanna don’t deserve love or success because of the “vulgar” things they say. We’re learning not to believe women when they come forward and accuse someone of hurting them. We’re learning how to judge our peers for the way they dress or have sex or enter relationships. All we learn from these life lessons is respectability politics. And as we can see with Gabby, these lessons are hard to unlearn.

I’m sure like me, Gabby will look back on this moment and be super embarrassed, but that’s actually a good thing. That’ll mean she learned something, or actually unlearned something about the things she believes about women and our responsibilities not to “entice the wrong crowd.”

Gabby’s already apologized for what she tweeted and I’d like to offer my own apology to Rihanna, any woman I’ve ever judged and to my past self. I’m sorry I ever deprived myself of the magic other women can offer my life because I was too blinded by what I believed was the “right” way to live. But now, like Gabby, I know better. When we know better, we do better and we listen to Rihanna while we do it.