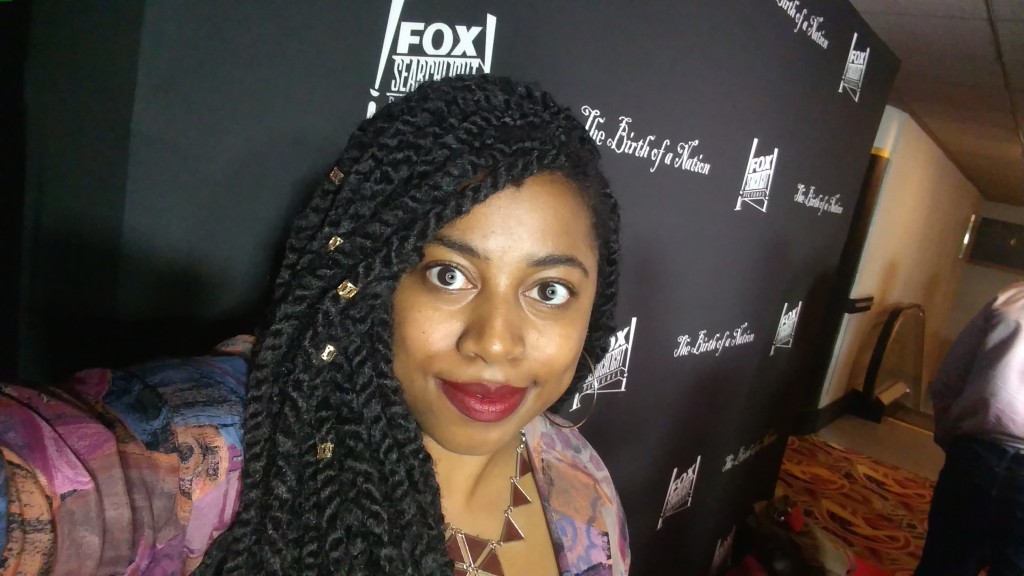 justJolie at ‘The Birth of a Nation’ red carpet screening

Last week, three people touched my hair without my permission. Two of them were complete strangers. One of them I knew. All three were not Black and my reaction to each incident was exactly the same.

The first hair touching occurred in Baltimore on a Monday. I was waiting for a bus to New York in a gross-ass Greyhound station, looking at the TV monitors trying to distract myself from the sneezing, coughing, piss smells and various other scents and sounds typical of a gross ass Greyhound station. All of the TVs were showing  news reports of the then developing story of Terence Crutcher, an unarmed Black man in Tulsa, Oklahoma who was shot by a white police officer in the middle of the street.

I was looking up at the monitors feeling a mix of sorrow and numbness as I listened to commentators share the developing details when I felt something tugging on my right side. A little Latinx girl was touching my Marley twists and playing with the ends. I looked passed her to a woman who had to be her mother but she was far too busy playing Candy Crush or something to notice her child invading my personal space. I smiled at the girl. Then I got up and moved across the gross ass Greyhound station to continue my contemplation about the value of Black lives in solitude.

The second hair touching occurred in Manhattan on a Wednesday. I was hugging and loving up on my coworkers who I haven’t seen in nearly five months. They were commenting on how different I looked without my signature afro. While marveling, one coworker reached out and examined my newly installed Marley twists. She said they looked so natural and wondered if it was the first time I’ve ever had long hair. I laughed awkwardly, thanked her for the compliment and sat down at my desk where I turned my attention to opinion pieces about Keith Lamont Scott, another Black man killed by a police officer, this time in Charlotte, North Carolina.

Later that night, I attended a media screening for Nate Parker’s Nat Turner biopic, The Birth of a Nation. I watched dramatic depictions of Black men, women and children being brutalized by white people with power. I watched Black slaves try to make it through the day while they were touched, ridiculed and killed without any agency. I watched Black people eventually grow so tired, that they had to rise up and fight for their lives.

The third hair touching occurred in Washington DC on a Sunday. I was waiting on the National Mall with hundreds of other people eager to enter the Smithsonian Museum of African American History and Culture during the opening weekend. I was standing on the threshold of the museum about to walk through the doors into the sacred halls when I felt something pulling me back. I whipped my head around to see an older Asian woman dressed in a sari smiling as she stroked my twists with her wrinkled hands. She noticed me staring at her and looked kindly up at me and said “This hair is so beautiful!”

I thanked her. Then I pulled my twists out of her hands and over my shoulders. I walked into the museum where I took #APeoplesJourney from Africa to slave ships to cotton fields to war zones to reconstruction to Jim Crow to segregation to lynch ropes to bus boycotts to the Civil Rights Movement to the birth of Hip-Hop to the White House and everywhere in between. I was filled with sorrow as I listened to accounts of Black families torn apart at the auction block. I was filled with fear as I looked at images of broken Black bodies swinging from trees while white hooded figures looked on. I was filled with pride as I read quotes from Mary McLeod Bethune, Fannie Lou Hamer, Malcolm X and more phenomenal Black people who fought to make my very existence possible.

I went home that night and reflected on my Very Black Week spent traveling and learning about my history while seeing my future unfold and I felt… PISSED! Because all I could think about is how three people invaded my space and disrespected my body by touching my hair and I did nothing about it!

At the museum, I didn’t want to seem like a stereotype. Like a typical loud, angry, overreacting Black woman with an attitude who may taint that elderly woman’s perception of African American people just as she enters a space meant to celebrate us!

With my coworker, I didn’t want to be awkward. I work with her. I actually know and kinda like her. How can I fault her, a well-meaning white person, for doing something she didn’t know was wrong?

With the little girl at the bus station, I was honestly too tired and irritated to get into a deep conversation about personal boundaries and cultural microaggressions with someone who clearly would not understand.

But if I’ve learned anything from my Very Black Week, it’s that I have to speak up. I have to speak up for myself and my right to exist. Last week, I was reminded of how disposable Black bodies are not just to police officers, but to children, old ladies and even people who call you friend. I was reminded of the sacrifices of Dr. King, Ida B. Wells, Nat Turner and countless slaves. I’ve known the stories of their bravery since I was a child but when did I forget their lessons? When did I lose my voice?

This is about more than my Marley twists. It’s about my seeing injustice, discrimination and racism unfold in front of my very eyes and not saying a damn thing because I’m too scared, too awkward or too tired. It’s about my being more concerned with hurt feelings than Black existence.

But I need to be about making sure that well-meaning white folks and people who just don’t get it truly understand what it means to be Black in America. I need to break uncomfortable silences and speak the truth even if jobs, friendships and relationships are on the line. I need to take ownership of my free Black body and demand that people respect my life, my family, my culture and my goddamn hair!

You may say, “Jolie, girl, it’s not that serious. All they did was touch you hair.” Yes, they did touch my hair because they felt like they could. They didn’t see me as a person. They saw me as a plaything, an anomaly, a commodity. Indifference leads to death for Black people. One day it’s touching your hair. The next day, it’s talking to you any kind of way in the workplace , at school or at the grocery store. The next day, it’s shooting you in the street because they never saw you as a person to begin with. If I make sure I’m respected from the beginning, maybe I can save some lives down the road.

There’s a quote by Maya Angelou in the Smithsonian that reads: “Bringing the gifts that my ancestors gave, I am the dream and the hope of the slave.” We free Black folks in the year 2016 and beyond are the future our slave ancestors could only dream about. When our histories are written 400 years from now, what will they say we contributed to the future?

I want my story to read that I stood up unapologetically for myself, for my brothers and sisters, and for my culture. That I did what I had to do, said what I had to say and did everything in my power to remind the world that Black Lives Matter and always have. I have to rebel against any person and any system that believes otherwise. The blood of my ancestors requires it. 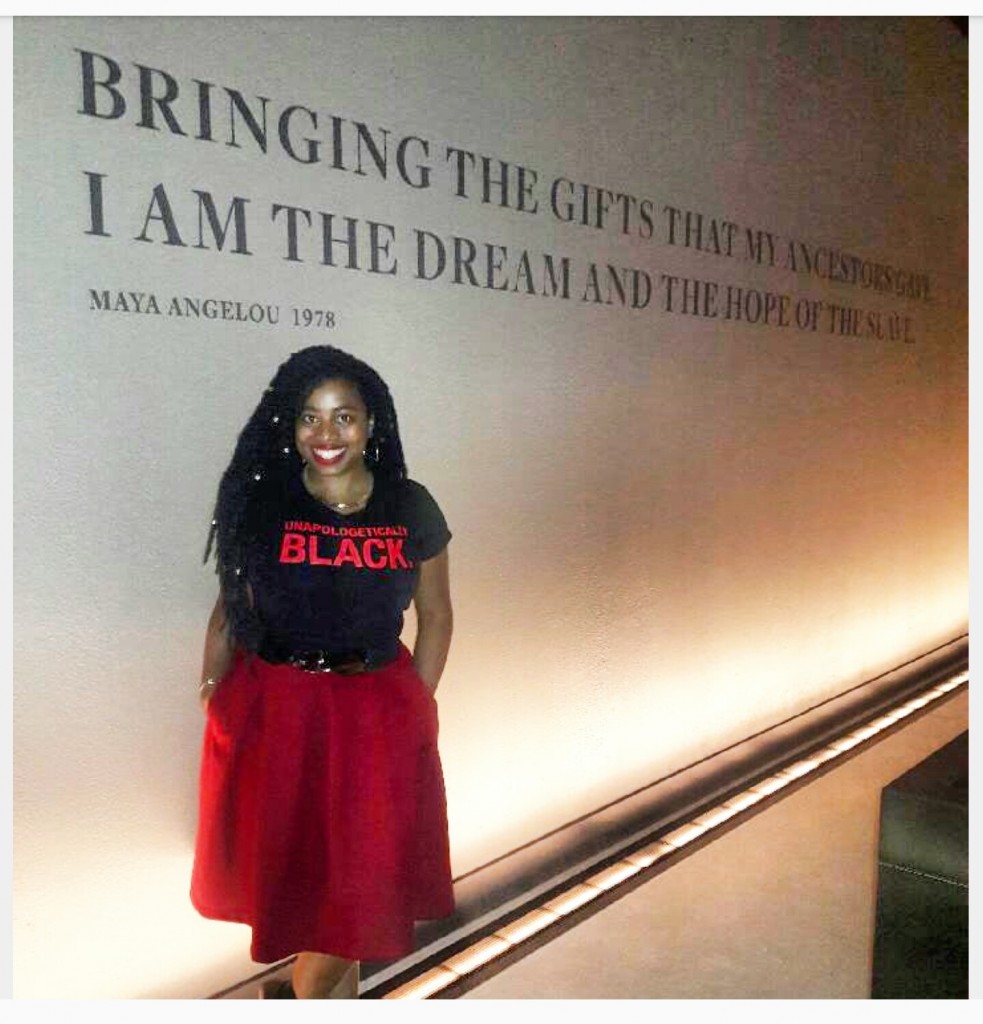