I am surrounded by very talented, creative people: artists, musicians, singers rappers, writers, speakers, filmmakers, designers, future CEOs, you name it! And I get really excited to see them live out their dreams, make some money, and pursue their passions successfully.

But that was not always the case.

For a long time, I would feel extreme jealousy toward some of those same friends for finding success when I had found none. For creatives like myself, success often seems like a far away, unattainable treasure. And it’s kind of disheartening to see other people making their dreams come true when my own goals seem to be on hold. I watched my peers in both awe and anger. I wanted to be just like them and yet I thought so many bad thoughts about them. I wondered, “What are they doing that I’m doing wrong? Why are they successful, and I’m not? I’m just as good as they are, if not better. It should be me in the spotlight, not them.”

I guess that makes me a hater.

As much as we hate to admit it, we have all been haters at one point or another. This phenomenon we’ve dubbed “hating” happens we criticize or abuse someone based on minor observations or based on nothing at all. When we look at our peers and think to ourselves, “Why do they get a new car?”…“How could they afford that?”… “How did she end up with him?”… “How did he book that gig?”…”Why do people care about her?”, we are guilty of hating.

It’s really hard not to compare yourself to others in this social media age. Life is on high definition display 24-7 and we can see all the great things happening in someone else’s life while seeing nothing great happen in our own. Sometimes we’re upset because other people beat us to the punch, like our ideas have been stolen from us. Sometimes we feel thwarted or usurped, as if attention has been taken away from us. Sometimes we’re just frustrated that things seem to be coming easy to someone else while we struggle for recognition. It’s easy to get angry, even at people we’ve never even met! 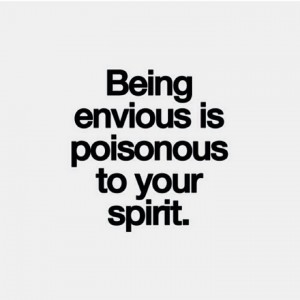 Hating is toxic. It can eat away at your motivation and keep you stagnant. It can drive you to literal madness where you’re both angry and crazy. When I find myself feeling this way, I try to switch my negative thinking over to positive thoughts before my anger takes over and turns me into a lazy, self-pitying green-eyed monster.

Be Inspired, Not Envious.

They say it’s lonely at the top but, does it have to be? Who says there’s not room for everyone’s success? There is no rule that says only one person is allowed to be successful at any given time. So instead of watching others be great, go be great yourself! These days, I’m motivated by the success of other creatives. Seeing them gain recognition for their work let’s me know that it is indeed possible to reap rewards for my own creativity. Other hard working people aren’t your competition. They should be your inspiration.

Be Kind to Yourself

Don’t take it too personally when someone else is playing the hare in your tortoise race. It’s easy to get frustrated when someone seems to reach success without even trying but we can never know the difficulties that person may have faced to get where they are. Everyone’s journey is unique. We need to learn enjoy our own journey, no matter how slow it may seem. The hard times will just make your memoirs all the more entertaining. We must learn to love ourselves and be proud of ourselves, otherwise, we’ll feel like nobody. The world is filled with enough people who are going to make you feel bad about your life. You shouldn’t be one of them.

Sometimes the best way to help yourself is to help others (wisdom stolen from the Avatar The Last Airbender series. Yup, a kids’ show). I’ve realized the entire time I was hating on my friends, I should have been helping them rise higher. Those same people I was once so jealous of are now good friends and colleagues and have offered me some great advice and exposure. They’ve used their greatness to help me be great! We have so much to learn from each other. If I may quote from the iconic film High School Musical, “We’re all in this together”. We all have to co-exist in this life. We might as well help each other get through it.

Some people say when you got folks hating on you, that’s when you know you’re doing something right. I don’t know about all that but I do know that seeking universal popularity is a futile struggle. While we all need support, we don’t need approval. Don’t take it personally when people don’t appreciate your effort. I’ve learned that not everybody wishes me well and that’s okay because I wish myself all of the success in the world. Don’t fight with your haters. They may actually admire you. They just can’t handle your light.

So keep shining and let other people shine alongside you. One person’s success does not mean your failure. Nobody is perfect. We all have trials. And when we see someone overcome their trials, it should remind you that your dreams are attainable, too. Don’t let hate be the reason you give up on yourself. Stop hating. Keep going.