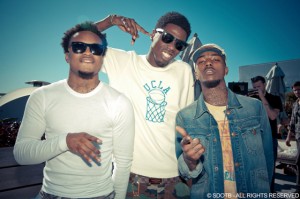 Hey guys! In case you didn’t know, I also freelance for a number of online publications, one of them being iaam.com, Online Teen Entertainment. I recently had the opportunity to interview a very popular hip hop group Travis Porter about their music, production company, and their latest indie film: “Red Rock“.

Known for their popular hip hop club bangers like “Ayy Ladies” and their collaborations with artists such as Drake and Tyga, Travis Porter have made a name for themselves in the music industry. However as of late, the rapping trio have tried their first had at acting in their feature length indie film, “Red Rock”, a film they describe as an action, thriller, mystery that is sure to keep Team Travvy and any new fans entertained.